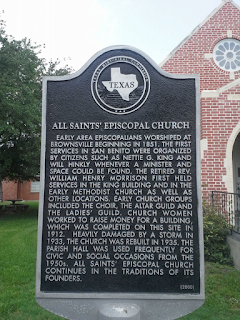 Two early organizers of the church included Mrs. Nettie G. King, who lived in San Benito and was the postmistress at Olmito, and Will Hinkly, an official of the San Benito Bank & Trust Co.  These two attended services at the Episcopal church in Brownsville along with a Mrs. Breen and her niece, Penny, and Mrs. Ella Virginia Van Ness.  They decided San Benito should have its own church.  The first services were held whenever a minister was available and wherever space was found. 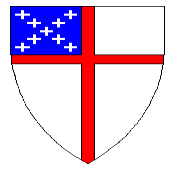 The first Episcopal services held in San Benito were led by Rev. William Morrison in 1910 in the King Building on the corner opposite the San Benito Land and Water Co. building and in the early Methodist church according to an unsigned history of the All Saints Episcopal Church of San Benito.  The undocumented account also notes that the First Episcopal Church, under the direction of Rev. Morrison, cost $2,000, excluding the price of the pews.

Episcopal services in the beginning were held in a grocery store, a pool hall or wherever a place could be found. Members of the congregation would light their way to services at night with lanterns, which were then hung on the walls to illuminate the meeting place.
The lot on which the new church was to have been built was given to the Episcopalians by the San Benito Land and Water Company, but because this land faced the wrong direction for summer comfort, it was exchanged for the one on which the church now stands, Lot 12, Block 31, Third Addition, on the corner of the 400 block of North Reagan and Adele Streets.

From the very beginning, the women of the church worked to raise money for the needs of the church, the first need being for a building. The fall bazaar was instituted in 1910. The ladies collected the fancywork they had labored on all winter long and arranged it carefully for sale.